Daly, a Seventh-day Adventist minister, is one of 60 chaplains volunteering at the games site. For the first week of competition he’s assigned to serve the media, along with 11 other chaplains who take turns staffing a media prayer room throughout the day.

He sometimes gets stopped while walking around Olympic Park, and it’s not always because he resembles a competing athlete. It’s usually for his extensive collection of pins on the lanyard around his neck holding his credentials.

“Wow, so many pins,” says a volunteer ahead of him in the lunch line. “That’s an impressive collection,” says another. Later outside, a woman shouts from the middle of a crowd walking to an arena, “You don’t have any Addidas pins to trade, do you?”

Here at the Olympics, trading commemorative pins is a serious hobby and well documented in local and international media. An NBC cameraman said he was doing a story on the custom as he captured footage of Daly negotiating with a trader wearing a vest festooned with pins from these games and Olympics past.

One pin he regularly shows to game goers is his Olympics “Faith” pin, a great conversation starter, he says.

“See this one, have you seen this one yet? Are you a person of faith?” he asked a security guard before inviting her to consider someday visiting the prayer room. 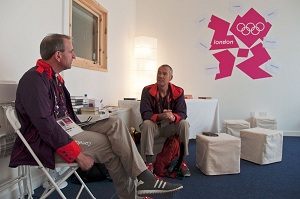 Daly, 45, pastors the Croydon Seventh-day Adventist Church south of London, and is spending his annual leave to volunteer here. He said working the Olympics is an opportunity to offer a ministerial presence at one of the world’s highest profile events.

“We want to provide a service and have a presence here,” he said Tuesday morning while walking among crowds of smiling people lucky enough to score tickets to games.

From the park’s security entrance gate it takes Daly almost 20 minutes of walking to reach the prayer room, located on “High Street,” a row of cafes, banks and service stores. For the 20,000 broadcasters, journalists and news photographers here these two weeks, High Street is the on-site shopping center located between the International Broadcast Centre and the Main Press Centre.

A religious center among journalists draws little traffic, even with its strategic location across from the media gym. They’re mostly a secular bunch, Daly said, and constantly dealing with deadlines. While most won’t attend a service, some will come to write prayer requests on a card, which chaplains will later pray for together.

On Tuesday morning a few followers of Islam trickled in and out for prayers. The room has folding chairs, cushioned ottomans and two semi-private prayer areas behind white room dividers. On the wall is the Olympics logo with added words of inspiration, such as “determination,” “courage,” and “excellence.”

Because few come in, Daly goes out. Most of his connections happen in the cafeteria where people relax and open up about their life. That’s Daly’s opportunity to affirm their faith or offer a word of support, perhaps even an introduction to Christianity. Proselytism isn’t allowed, but he can explore their own faith with them or invite them to seek a deeper spiritual life.

Next week he’ll work with athletes. If that assignment is anything like past games, he’ll wait for athletes to come to him instead of going out to meet them, said Davide Sciarabba, an Adventist chaplain who served at the 2006 Winter Olympics in Turin, Italy. 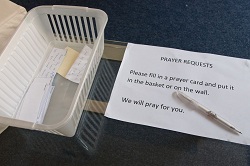 In Italy, Sciarabba would meet athletes who came to pray with chaplains in the interfaith center. Though rare, a few athletes have asked him to pray for them to compete well, something Sciarabba said he wouldn’t do, imploring of the athlete: “What if your opponent comes five minutes later and asks for the same thing?”

Daly said people are surprised to learn chaplains are at the games; however, his attempts to prove it Tuesday morning failed. “No, [I’m not] suprised at all,” said a woman sitting on a park bench with three friends.

A female security guard monitoring the entrance to the NBC broadcast studio said, “There’s chaplains everywhere – at hospitals, at work, even at the cemetery there’s chaplains.”

It could be because the Church of England – the Anglican Church – has made workplace chaplaincy a priority. So says Christopher Jamison, a Catholic priest also serving as a chaplain in the prayer room.

Prioritizing chaplaincy could also increase awareness of the denomination. The Seventh-day Adventist Church is a small minority in Britain and little known in most areas. “SDAs are way down there,” Daly said.
“Seventh-avenue church?” said Kaye Wren from Birmingham, asking Daly of his religious affiliation, before admitting she hadn’t heard of the Seventh-day Adventist denomination.

At the Adventist Church world headquarters, Chaplaincy Ministries Director Gary Councell said Adventists “must rethink and expand how we do ministry beyond traditional paradigms. Jesus mingled with all types of people in His day. Chaplaincies are a way of mingling in the greater community, of extending ministry beyond the four walls of a church.”

To get his summer job, Daly had to apply two years ago and undergo a half-hour interview, which he said had little to do with acting as clergy or doctrines and focused more on his experience of “inspiring” people and “making a difference,” he said. 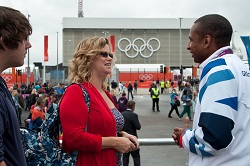 Daly said he’s often confused for an athlete in Olympic Park and in surrounding shops. It’s because of his fit physique and a white Team Great Britain coat, which he bought at a gift shop to guard against the rainy drizzle. He’s even reluctantly signed a few autographs to oblige fans who refuse to believe he’s not on the national team.

Sometimes he’ll wear a minister’s collar, even though Adventist ministers don’t wear them. He says it better serves others, allowing them to more readily identify him as a chaplain.

“When you become a chaplain, spiritual care is the priority, not your denomination,” he said.

Still, if anyone does ask what church he’s from, he discusses his denomination and shows its logo. It’s a pin on his lanyard.

He hasn’t traded it. [tedNEWS]