When evangelists and preachers communicate a biblical understanding of apocalyptic writings, they describe what the prophet sees in vision about the future. While the Trans-European (TED) Treasurer Nenad Jepuranović would not claim a prophetic gift, his Year-End Meeting reports customarily include a brief forecast of global and European economic trends for the following year, required to intelligently shape the budget.

Now the longest serving TED officer, Jepuranović was elected as Treasurer in November 2013, re-elected in 2015 and again in 2022. Noted for his calm demeanour during challenging situations, his report this year included a measure that most had thought to be a problem of times gone by – inflation! Taking a five-year view Jepuranović noted for example, two key global products leading the inflationary cycle, Natural Gas up by 178%, and Soya Bean Oil up by 179%. In this climate, the task of forecasting is near to impossible, but based on the IMF data, he reported that Euro area could see economic growth of 0.5%.

Moving specifically to the current financial position (as of 30 September) Jepuranović reported a 1.1% decrease in Division-wide tithe in the last year and explained how funds were dispersed: between workers and travel expenses (36%), appropriations to Unions and entities (30%), tithe sharing reversions for evangelism (15%), appropriations to Newbold College (11%), operations, including meetings and site costs (8%), and ‘other’, including transfers and tithe exchanges (0%). 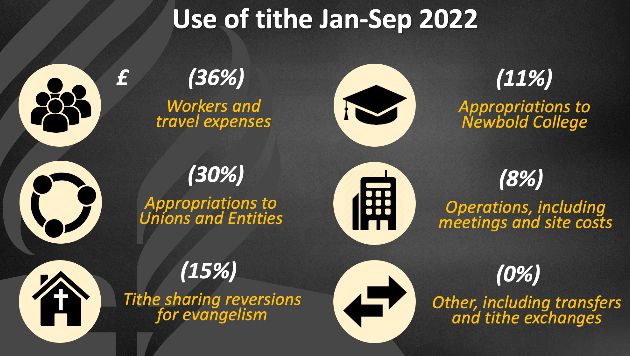 Jepuranović also explained that TED investments have decreased, due to the global economic climate. “Investments, made in both US dollars and sterling, are chosen in consultation with a team of General Conference investment specialists advising on the best ethical portfolios,” said Jepuranović.

After all allocated funds are taken into consideration, the TED’s liquidity is 21.4 months –meaning that were TED’s income to dramatically fall to zero, it would be able to financially survive as an organisation meeting current liabilities for just under 3 years.

Not only does TED receive tithe, but it also returns a tithe to the General Conference which is currently increased to 2.3% and expected to rise to 3.0% by 2030. At the same time, TED makes appropriations to Unions and attached fields and for 2023 is expected to increase by up to 13% in their respective local currencies.

The Newbold college extra tithe sharing scheme was introduced by a vote of the Executive Committee back in 2010, to provide financial support towards the operating costs of Newbold in challenging times, and to which all Unions an attached fields contribute.

“Whatever the challenging economic circumstances”, continued Jepuranović, he was assured by the counsel of Ellen White, “We have nothing to fear for the future, except as we shall forget the way the Lord has led us, and His teaching in our past history.”