22 March 2016 | St Albans, UK [Victor Hulbert] Once again the world has been hit by tragedy with the 22 March attacks on Brussels Zaventem airport and a nearby metro station leaving more than 30 people dead and many more injured.

In an emailed statement released shortly after the attacks, Jeroen Tuinstra, president of the Seventh-day Adventist Church in Belgium and Luxembourg stated, “We at the Belgium-Luxembourg Conference are shocked by the attacks that shook Brussels this morning. We express our condolences to the victims and pray for both their families and for the safety of residents.”

Raafat Kamal, president of the Trans-European Division of the Seventh-day Adventist Church expressed shock over the attacks representing another dark moment for Europe and asking for prayers for all the victims and their families.

Wim Altink, president of the Adventist Church in the neighbouring Netherlands wrote on the church website, “The attacks in Brussels, on March 22, made Europe tremble. The Adventist Church abhors all violence in general,” he stated, noting that even in such situations it is important, even now, to share God’s love.

In a more general comment he added that, “In many countries and regions, insecurity and violence are the order of the day. People who face such difficulties, grieve, or live in fear are in our minds. We pray for strength and support for people who are located in areas affected by violence, no matter what their background or religion.”

Ted N.C. Wilson, president of the Adventist world church, said he had prayed for the people of Belgium and also noted that local church members could be “a spiritual strength to others in this very difficult time,” reports Adventist Review.

How should we react to such attacks? In harmony with his comments following the November attacks in Paris, Ian Sweeney, representing the Adventist Church in the UK and Ireland responded, “While in our prophetic understanding we know that evil and bloodshed will blight our world until our Saviour’s return. It is nevertheless our duty to represent and share Christ’s love to those who are grieving and suffering through our prayers, comfort and acts of practical kindness as opportunities arise. Our response to acts of hatred must be acts of Christ’s love.”

Terrorists aim to provoke fear and generate hatred. “That is totally contrary to the way of the people of God,” Kamal states. “Such acts must not deter us from our mission – and that includes travel through international airports as needed.” Leading the Adventist church across 22 countries stretching from Iceland in the North to Greece and Cyprus in the South, and from the Netherlands across the Balkans and up through the Adriatic into Scandinavia, the work he does along with his team in the TED office does include a considerable amount of travel. “Clearly we must be cautious, but we will not give in to terrorism. Our imperative is to let the people of Europe know God loves them, and to train and lead in the districts that we have responsibility for.” [tedNEWS] 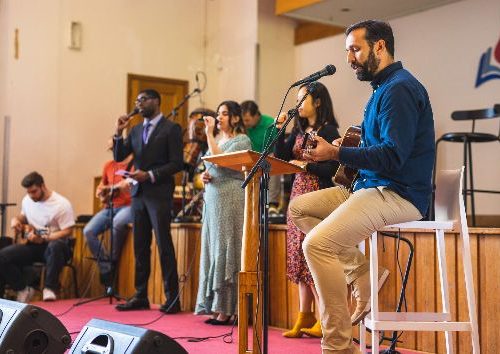