Pastor John Arthur (1938-2021) worked for Adventist Development and Relief Agency (ADRA) in the Trans-European Division region for 11 years. It was during his work with ADRA that he had the privilege of meeting Queen Elizabeth II on three occasions, and received the prestigious Order of the British Empire for his public service.

Remembering this auspicious occasion, Ruth Arthur shared, “John always admired Her Majesty’s example of Christian faith and of her humility and respect toward all people.” In 2016 “as a family we were invited to Buckingham Palace to witness John become an Officer of the Order of the British Empire. He humbly accepted the OBE medal and cherished the brief time to talk with the Queen,” she added. 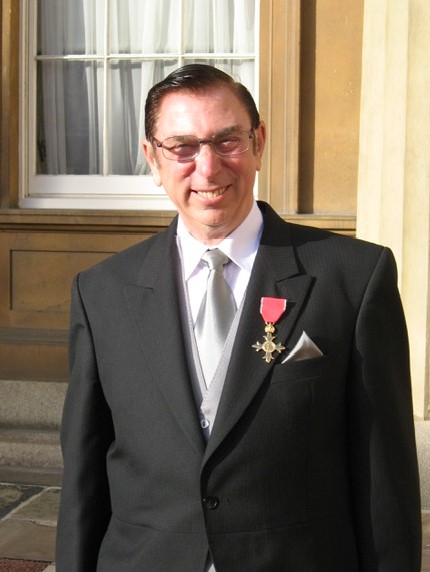 In this extract from his personal memoir, Man on a Mission, John shared his experience of meeting the Queen;

“Those receiving awards lined up in an adjacent room and awaited introduction. As with all royal events, organisation was impeccable. Timekeeping was as precise as a Rolex watch! I stood nervously at the ballroom entrance, hoping I would not make any mistake!

“John Arthur…for services to Overseas Aid,” boomed the voice of the Lord Chamberlain.

My moment had arrived! I made my way to the dais, followed prescribed procedures and stood in awe. The world’s most familiar face was just a few inches in front of me!

Her Majesty attached the medal to my lapel. “What have you been doing in connection with international charity work?” she enquired.

My answer was brief because each conversation had to be no longer than thirty seconds. I squeezed in a good wish by way of a few words from the Bible.

“Your Majesty, may you not grow weary in well-doing!” I said.

The Queen smiled, shook my hand and expressed appreciation. My thrill was over! I stood back, bowed, turned right, and made my way along the red carpet to the exit.

What a privilege to shake the hand of a British monarch who has, in the words of Robert Hardman, ‘Travelled further than all her predecessors put together… lived longer than any of them… known more historical figures than any living person and played a major role in transforming Britain from an imperial power to a multicultural nation.’

For the finale, we joined an excited procession making its way to the Palace courtyard for photographs. Everybody wanted to capture memories of a very special visit to London SW1.”

The original version of this story was published in the Scottish Mission news website [Photos: courtesy of Ruth Arthur].