28 January 2011 Pittsburgh, Pennsylvania, United States [Arin Gencer, ANN] With unemployed members and decreased tithes, the Seventh-day Adventist Church in Europe has been struggling to contend with the global financial crisis.

Particularly in Greece, Spain and Portugal — countries whose unemployment rates are among Europe’s highest and where the financial crisis has been particularly dire — the global Protestant denomination has been forced to make adjustments, striving to do the same work with less.

“With faith in our Lord Jesus Christ we are doing the best we can,” said Apostolos Maglis, president of the Adventist Church in Greece, which has already seen the adverse effects of the
country’s debt crisis on the church body. He anticipates these will

Since receiving a bailout last year from the European Union and the International Monetary Fund, Greece has introduced a number of austerity measures to significantly reduce its public deficit, spurring several protests and strikes from unions.

The Adventist Church’s Greek Mission, which consists of 10 churches, has seen the turmoil impact the church in various ways. These include a decrease in tithes — down 20 percent at the end of 2010 relative to the previous year, for the first time in a decade, Maglis said in an e-mail.

The mission expects that number to further drop to 35 percent lower in 2011, he added. The economic challenges represent yet another hurdle to the Adventist Church in this part of the world, where evangelism already faces considerable obstacles, including the dominance of the Orthodox Church and the inability to conduct public religious programs, Maglis said.

“Many members lost their work and are unemployed,” Maglis said, preventing them from paying rent and buying basic necessities. Several churches are collecting and distributing food to individuals in need, he added, “but this is not enough.”

He described two recently launched evangelistic programs — one training people to be missionaries at work; the other, showing members “how they can bring a friend to Jesus.” He said both have led to a record 56 baptisms in the past year and brought membership to about 570. The Greek Mission’s baptism goals set for this year now must contend with reduced funds.

Officials in the Spanish and Portuguese unions say they are experiencing similar problems, which are not limited to the Adventist Church or even Europe. The church’s North American Division has reported slight but consecutive drops in tithe in 2008 and 2009, a decline attributed to U.S. economic woes.

The “delicate” economic situation in Spain — where the unemployment rate is the second-highest in Europe, with 3 million people out of work — has put the Adventist Spanish Union of Churches in a difficult position since 2008, said Juan Andres Prieto, the union’s treasurer.

“The same thing that is happening in society is happening in the church,” Prieto said, citing, as an example, a congregation of about 60 or 70 members, all of whom are jobless. 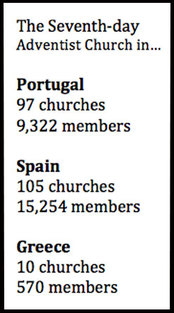 The union is operating on a savings policy: Whatever they don’t bring in, they don’t spend. And although they continue trying to serve the church in the same way with fewer resources, certain things have been affected, Prieto said.

Since November 2008, the union has suspended its practice of giving financial assistance to new groups just starting to rent meeting space, he said, and has even reduced occasional aid to established congregations. Union salaries have been frozen since that time as well.

In an attempt to meet the challenges of the day, the union has proposed a voluntary program that would take 2 percent of pastors’ salaries to create a reserve fund for supporting church members in need.

Similarly, Portuguese church leaders are finding it difficult to perform certain activities, such as launching new congregations or establishing communities in certain areas, said Rui Filipe Dias, treasurer for the denomination’s Portuguese Union of Churches. Unemployment in that country is at about 10 percent, he said.

“The biggest difficulty I’ve seen is supporting all the needs of our members,” Dias said, adding that the union typically sees offerings decline in the midst of a financial crisis. “Their needs are much greater than in a normal situation.”

“We are depending on the goodness of God to guide us,” Dias added. [tedNEWS]