Estonia’s National Broadcaster will air a Christmas day service from the Seventh-day Adventist Church. Recorded a week earlier on 18 December, the theme will focus on the Magi from the East. It is presented by Pastor Andres Ploompuu, president of the Estonian Conference, and Pastor Mervi Kalmus.

Ploompuu expressed his pleasure that “Our cooperation over the past few years has been very cordial.”  He adds, “The Council of Estonian Churches tries to make sure that all denominations have an equal opportunity to air services on the National Broadcast.”

While last years’ Christmas service came from the Methodist Church, Adventists still had exposure as, during lockdown and with churches closed, extra church services added to the schedule, four of which were done by the Adventists. Ploompuu said, “The feedback to those services was positive and it seems like the trust about our ability to share the Christian message in an accessible way has grown.“

Why the particular theme?  “I happened to see a postcard with three wise men and the card spoke to me in a meaningful way,“ says Ploompuu. “These men noticed something the local people could not. It is a story about wisdom, about people who seek and find.“

It was the first time Ploompuu ever preached to the camera in the National Broadcast’s studio. The second half of the sermon was presented by Kalmus. It is her third time in the studio.

“It gets easier,“ she says. “By now I have a good understanding of what happens and how and what is expected of me. I also know what I need to do in order to deliver my part well – I need to memorise my sermon word for word.“ 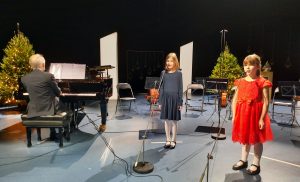 Alongside the preaching and readings from the Scripture, the service was filled with music. Helerin Lehtla led the musical team. She said, “These kind of services are always a total sum of many talents and dedicated people and prayers. I am grateful that there was someone who was in charge of the instrumental music, someone else dealt with children. Also new arrangements needed to be written to suit our little chamber orchestra.”

Lehtla adds, “It was important to see the service as a holistic entity, therefore when the theme and Scripture readings were chosen, we could add music accordingly.“ She had previously seen church services being recorded in Tallinn Central church but never in a studio setting. “It was very interesting to observe how everything was done,“ she says. “It was amazing how many people were working full time to get an hour-long service recorded.“

Ploompuu concludes, “I am very glad we accepted this challenge and recorded the service. We did our best and I really hope our message will speak to people’s hearts.”

This article was first published on the Estonian Conference website.  The programme will air at 1300 local time on etv.err.ee.