Bryan W. Ball is to be commended for writing a readable, biblically grounded, and Christ-centered book on the end time. But by the very nature of the title, the author seeks to rebalance the Adventist interest in the end time from ‘events’ to ‘people’, even going as far to suggest this work as an ‘essential sequel’ to the numerous volumes written on prophetic timelines.

Grounded in an examination of the letters of Peter, the book has sixteen chapters which take the reader through a thematic study and is very much a pastoral commentary (p. 16). The book is well laid out with important sentences and ideas in bold that assist the reader to engage with key ideas. Furthermore, we welcome the fact that each chapter ends with questions for reflection and sharing among a group.

A New Testament conviction that is clearly communicated at the outset is that the early church understood that the end-time had already come (p. 13). Ball believes that the epistle was written both for first century believers and twenty-first century believers and communicates in that fashion as the book unfolds. It is impossible to unwrap all the spiritual delights of this book, so I will highlight just a few in this review as an appetizer.

In chapter three the author points to Peter’s Christ-centered thinking by listing thirteen aspects of the trans-historical ministry of Jesus (p. 33). Clearly Jesus had made an indelible mark on Peter. Ball further confirms when he writes: “Peter mentions the name of Christ more than fifty times in his epistles, making Christ relevant to his readers by reminding them not only of Christ’s sufferings and substitutionary death, as foretold in Isaiah 53, but also of His resurrection, priestly ministry and second coming” (p. 44). His focus in this chapter on the cross is stirring! 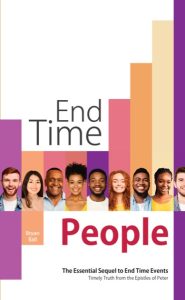 Ball does a good job of unpacking the often-misunderstood ideas of present truth in chapter 4 (p. 49) and the notions that ‘sanctification is the work of a lifetime’ (p. 61) and that the Spirit will come more fully at some point in the future in chapter 5 (p. 61). In relation to the first Ball rightly states that some folks assume that present truth points to its progressive nature and that what was once true is no longer true. Truth is indeed progressive but also unchanging.

Regarding the second misunderstanding Ball claims that thousands “strive day after day, week after week, for the rest of their lives…” (p. 60) Sanctification is a work of the Spirit from beginning to end and the Spirit has already been poured out at Pentecost. Ball challenges his readers to surrender more fully to the Spirit.

The remaining chapters are well written, theologically incisive, and biblically enriching. There are further nuggets to savor, such as “being distinctive is determined not by what we believe or by what we do, but by who we are” (p. 133).

The book could have been strengthened in at least two ways. First, because it contains such deep theological insights the inclusion of appropriate endnotes would help curious readers to investigate matters further. Second, the use of recent academic works and illustrations post the 1990’s would have made the book more engaging. Otherwise, I highly commend this pastoral work for personal reading and for group study (small groups and prayer meeting themes) to strengthen the faith, enliven the hope, and build the courage of God’s end-time people.

Kayle B. de Waal, PhD, is the Disciple-Making and Prayer Ministry coordinator  for the Trans-European Division.

End Time People was edited and published while David Neal served as editor of the Stanborough Press from 2019 – 2021.