Almost immediately the General Conference Session opened, an invitation was extended to a special guest – the Holy Spirit. Not perhaps the most unusual action, but one taken to signify as ever the primary agenda for the session – mission. 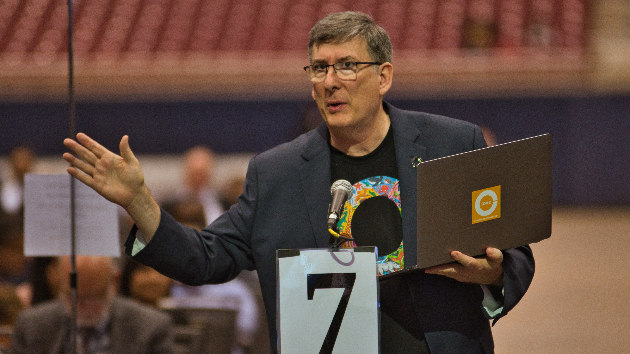 At face value, the agenda seems anything but – as constitution, policy and Church Manual matters dominate, but noticeable is the attempt of leaders to explain the mission potential of each amended action.

In the context of today’s multi-faith world, the potential for the everlasting Gospel to go to the whole world seems more challenged than ever before, shared Mark Finley, during an extended worship time. Inviting delegates to consider again what happened on the Day of Pentecost, Finley was emphatic that the daily baptism of the Holy Spirit will be once again similarly outpoured in the future. But not only is it to be a future reality, but one to pray for daily, and experience in the here and now. Transformed by grace, because of the cross, the early church changed the world, and the church today will do the same again.

Continuing the theme, Dwight Nelson reminded delegates to pray for the Spirit because it is in such plentiful supply as suggested by Ellen White in the book My life Today:

“With the reception of this gift, all other gifts would be ours; for we are to have this gift according to the plenitude of the riches of the grace of Christ, and He is ready to supply every soul according to the capacity to receive” (My Life Today p.57).

“Don’t wait until troubled times come before you call for the outpouring of the Holy Spirit”, Nelson appealed.  “I say we start calling on Him right now. “With the fast approaching (end-time) conflict” Nelson continued, “let us call upon the Holy Spirit with shameless audacity today and until Jesus comes.” He developed this theme further by referencing a book which has energised his personal spiritual journey, Steps to Personal Revival by Helmut Haubeil.

Elder Ted Wilson’s report to delegates described how everyone of the many and various General Conference Departments and Ministries have contributed to mission over the last seven years, mission undertaken in the context of a world which “has experienced significant crises which should not surprise us.” And so “we have had to adapt” reported Wilson, “but we have been blessed.”

Nowhere has the need to adapt been greater than in Ukraine – and yet reported Wilson, “Since the war commenced in January 2022, more than 150 people have been baptised.”

Dealing with a matter left over from the 2015 General Conference Session – that of how we as a community of faith understand scripture, Wilson reported that the General Conference has not left this matter to collect dust, but through many Bible conferences for pastors around the world, the Biblical Research Institute has produced a report in the form of a book on the matter focussing on  Jesus Christ, Scripture, Adventist identity, unity, and mission. From the perspective of this reporter, it feels as though the matter is still to be resolved, with a hope the conversation continues to help maintain the unity of the church on this matter.

Just before 9pm, the nominating committee reported that it was ready to present a name to delegates for president of the General Conference. Chairman of the committee, Pastor Lowell Cooper noted in his introductory remarks, how blessed the nominating committee felt with the leadership of the church over the last five years. Consequently, Pastor Ted N. C. Wilson was nominated as president, and duly elected.

Monday began with an earnest appeal for the daily outpouring of the Holy Spirit. By the end of day, we believe the Spirit revealed His will.

A further reflection on Pastor Wilson’s re-election will be shared in tomorrow’s edition of TED News. We lift up in prayer both Ted and Nancy Wilson as they continue to serve the Lord.

Is your scarcity mindset robbing you?